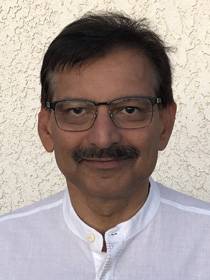 Kaushal Gokli was initiated in Kriya Yoga in 1992 by Paramahamsa Hariharanandaji in Cincinnati, Ohio. His parents and many family members are also initiated and are practicing Kriya. Paramahamsa Prajnananandaji instructed Kaushal to guide, initiate, and teach Kriya Yoga in 2017. He has offered dedicated service to Kriya Yoga by starting a Kriya center in Detroit in 1995, being a center leader in Cincinnati for five years, and opening a new center in Claremont, CA in 2022.

At present, Kaushal lives in Upland, California with his wife, Anita. They have two children, Neal & Rayna.

Kaushal is a professor and the Director of the Entrepreneurship Program in the department of engineering at Harvey Mudd College.  Previously he has held positions of General Manager, VP of Manufacturing, and VP of Product Development in multinational corporations.