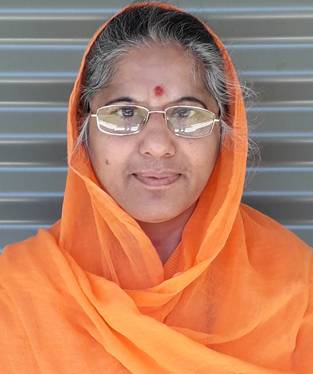 In 1964, Sunita Joshi was born into a traditional brahmin family in the Indore district of Madhya Pradesh, India. Inherently gentle-natured, as a child she was introverted and shy. The pursuit to know Truth was instilled in her from a very young age. While growing up she was blessed with the invaluable guidance of her spiritual parents and their guru Pandit Shriram Sharma Acharya, who nurtured in her a sincere quest for God.

As a young woman she took a state government job with the Public Health Engineering Department while pursuing her degree in fine arts. Then, a few years later, on February 24, 1994, the course of her life changed forever. On that momentous day she met His Holiness Paramahamsa Hariharanandaji at the Rourkela Ashram in India and was initiated into Kriya Yoga. From 1995 to 1996, through God’s grace, she had the beautiful opportunity to practice Kriya Yoga meditation in the auspicious company of Paramahamsa Hariharanandaji at the Rourkela Ashram. Fortified with the Master’s enlightening instructions, she again returned to her career, feeling deeply inspired, and with an even greater determination to practice Kriya Yoga meditation.

In 2002, Sunita attended the first Residential Brahmachari Training Course at Hariharananda Gurukulam under the direct guidance of Paramahamsa Prajnananandaji and other senior monks. Two years later, in 2004, she gave up her career and all worldly pursuits to join the Hariharananda Balashram, under the direction of her master Paramahamsa Prajnananandaji, thus dedicating her life full time to spiritual practices and faithful service to the Master.

Sunita was initiated into naishthika brahmacharya by Paramahamsa Prajnananandaji on February 23, 2009, and given the name Brahmacharini Shantimayi. Then on February 20, 2012, having completed four dutiful years of dedicated service, she was ordained as a monk in the Giri monastic order and given the name Swami Sarvatmananda (bliss of the omnipresent Self).

From 2016 to 2020 Swami Sarvatmananda resided in Australia, serving the masters at the Kriyavidya Mandir of Australia and traveled to the different Kriya centers in Australia, New Zealand, and Fiji. Her work involved organizing kriya programs, guiding meditation, and teaching the technique of kriya yoga meditation to all who came in search of peace and truth. Then in 2022 she moved to the USA to help with Kriya Yoga Institute with their Kriya activities.

She also helps with the kriya yoga publication of Prajnana Mission in the Hindi language.