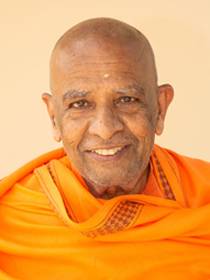 Following the spiritual path came easily to Harinath Bathina. Born into a devout family in Eluru, Andhra Pradesh, India, he had a natural inclination for ritualistic practice. Consequently, from a young age he was strongly drawn to temples, often volunteering his services and holding various positions of responsibility.

As a young man he completed his doctorate in Chemistry at Osmania University in Hyderabad, and while doing his post doctoral studies abroad at Northwestern University of Chicago, he also obtained an MBA degree from that same university. A married father of three children, Harinath settled in the USA and worked as a Manager of Research and Development in various chemical industries in the Midwest for many years. However, even though he left his beloved motherland behind to settle in the West, his innate desire to learn the Truth at the feet of a realized Master was ever with him.

In 1996 Harinath’s innermost longing was fulfilled, for that was the year he met Gurudev Baba Hariharanandaji and Baba Prajnananandaji in Florida. Captivated by the divine love and magnetism emanating from these great Masters, he was thereby initiated into Kriya Yoga, making a lifelong commitment to this soul-restoring, life-changing technique. Since that time he has faithfully served Prajnana Mission and his Gurus in whatever capacity that was needed. Initially, he and his wife served as Kriya Yoga center leaders in Cleveland, Ohio, where they played an integral role in organizing programs and retreats and were also instrumental in establishing other Kriya centers in the Midwest.

In 2009, after so many years of dedicated service to his family and job, Harinath retired from the workforce, and he and his wife, in loving agreement, turned the page on a beautiful new chapter of their lives.  Following the ancient Hindu tradition of krama sannyasa, having completed the first two ashramas of life, brahmacharya and grihastha, they were given sacred diksha by their beloved Guruji Paramahamsa Prajnananandaji and thus entered the third ashrama of vanaprastha. After receiving initiation, Harinath joyfully continued his seva and sadhana at the Miami ashram, at Hariharananda Gurukulam, and also Hariharananda Tapovanam in Uttara Kashi. Then on February 20, 2012, the auspicious day of Mahashivaratri, through the infinite grace of the Guru, he was blessed with the fourth ashrama of sannyasa, becoming Swami Matrukrupananda Giri. Matrukrupananda means 'the bliss of the Divine Mother's grace.'  Currently Swami Matrukrupananda Giri is a resident swami of the Kriya Vedanta Gurukulam, Joliet, IL, where he selflessly serves God and Gurus with heartfelt dedication and love.