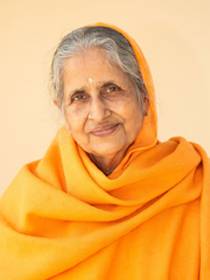 Anita Patnaik was born in the city of Cuttack in Orissa, India. Her father, Shriram Patnaik, was highly educated and his contribution in the field of education, even to this day, is widely acclaimed in the state of Orissa. Having lost her mother at the age of three, she was lovingly brought up by her father. Shy and reserved by nature, little Anita loved her pious father and silently absorbed his noble qualities.

Years later, during the early 1980’s, she met Gurudev Baba Paramahamsa Hariharanandaji.  Drawn by the spiritual charisma of this great saint, she took initiation into Kriya Yoga from him shortly after their first meeting. Gurudev’s love for her was immense. During his visits to India, she had the rare opportunity to serve and lovingly care for him. She also met Triloki Dash (now known as Paramahamsa Prajnanananda) at that time.

After Gurudev’s mortal departure, during his centenary celebrations, Anita was empowered as a yogacharya. She began initiating and teaching the techniques of Kriya Yoga to the many aspirants in India. Then, on February 23, 2009, she was initiated into the monastic order by her master, Paramahamsa Prajnananandaji, and was given the new name Swami Gurukrupananda Giri, which means one who is absorbed in the bliss of guru’s grace.

Swami Gurukrupanandaji lives in the various ashrams in India and serves her master by initiating aspirants, conducting Kriya programs, and participating in the Executive Committee meetings of Prajnana Mission. In 2015, Swamiji became the President of Prajnana Mission. Swamiji advises others to “serve the guru and practice your sadhana sincerely—keeping immense faith in the Almighty.” She also states that the transformational effect of Kriya Yoga has given her “immense mental peace, stability, and calmness” in her daily life.