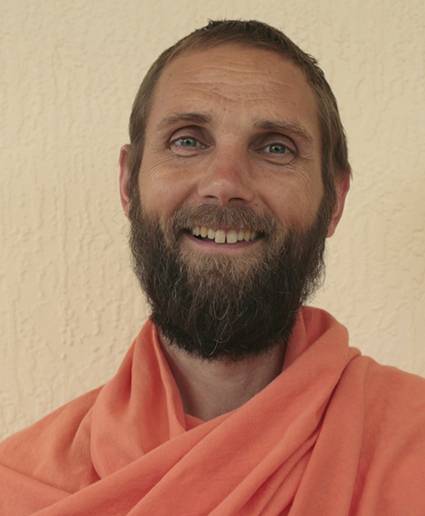 Swami Chidrupananda was born and raised in Pasewalk, Germany. While a young man, he worked as a Security Telecommunications Electro-mechanic for a major railway corporation in Germany. Being a seeker of Truth, he read a book titled, Kriya Yoga by Paramahamsa Hariharananda. Afterward, he made arrangements to attend a Kriya Yoga program in June 2000, at the Tattendorf Ashram in Austria. It is there where he met Paramahamsa Prajnanananda and received Kriya initiation from him.

In 2001, he traveled to the USA to meet his Gurudev, Paramahamsa Hariharananda, at Kriya Yoga Institute in Homestead, Florida. After he completed the First Residential Brahmachari Training Course in 2002, at Hariharananda Gurukulam in Balighai, Odisha, India, he joined the Tattendorf Ashram, Kriya Yoga Centre. As a brahmachari, he spent time between the Vienna and Miami ashrams for several years. In 2006, he relocated to Homestead, Florida to join the Mother Center ashram, Kriya Yoga Institute.

In the year 2012, he took Sannyasa initiation at Hariharananda Gurukulam, from his Guruji, Paramahamsa Prajnanananda. His Guruji gave him the name Chidrupananda, which means consciousness in the form of bliss.

Swami Chidrupananda Giri is currently a resident monk in the Mother Center ashram, Kriya Yoga Institute, in Homestead, Florida. He conducts programs and propagates Kriya Yoga throughout the USA. He is also authorized to initiate seekers into the ancient spiritual path of Kriya Yoga.