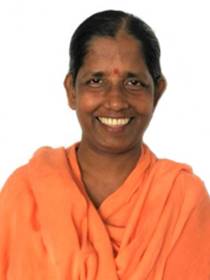 From childhood, young Ambika Ma was intensely seeking knowledge of her Self. Throughout her youth she visited many saints, sages, and holy places in her quest for Truth. When she was five years old she first saw her beloved Gurudev, Paramahamsa Hariharananda, but she did not officially meet him until 1996 when she was 24. From that moment she began her discipleship with him and stayed with him as much as she could until his mahasamadhi in 2002.

She studied architecture at the Women’s Polytechnic in Bhubaneswar, Odisha and held a job in the government sector in the Department of Town Planning.

For as long as she can remember the plight of the poor weighed heavily on her heart. She filled her life with social work in an endeavor to alleviate this suffering as much as she could.

She attended the First Residential Bramachari Training Course in 2002 and officially began living ashram life after her initiation into sannyasa in 2012 when she received the name Swami Avyaktananda Giri from Paramahamsa Prajnanananda.

In 2017 she came to the West and has been serving at the Temple of Compassion women's ashram in Texas.