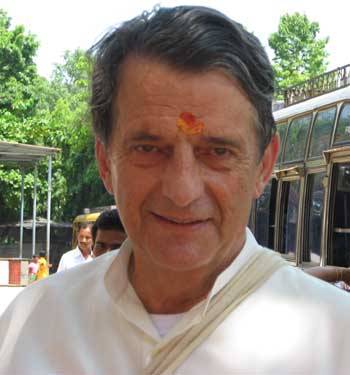 After a beautiful Closing Ceremony of Gurudev’s centenary year at Cuttack, Orissa, I now have to convey some sad news to you all.

Yogacharya Miguel Bermudez, a long-time disciple of Gurudev of over three decades who has been a strong pillar of Gurudev’s mission in South America, and especially in Colombia, is no more. He left his body to be with God and gurus early this morning. In spite of his physical condition, he was able to be present at Gurudev’s Closing Centenary Ceremony in India. I remember his cheerful and smiling face when I saw him in India three weeks ago.

His contribution in spreading the message of Kriya Yoga is ever memorable. His strong faith in God and gurus is a bright example. Let us pray to God and gurus for his peaceful journey to the Divine abode.

Yogacharya Miguel Bermudez was born in Bogota, Colombia, grew up in California, and then returned to Colombia. Since earning a degree in economics, he was permanently involved in academic life. He spent a year at the International Center for the Advancement of Management Education at Stanford Business School, and later at Harvard, where he obtained his Masters degree. Paramahamsa Hariharananda initiated Miguel Bermudez into Kriya Yoga on his first visit to America in 1975. A few years before Baba Hariharananda left his body, he named Miguel Baba a yogacharya. He combined the busy job of Vice President of the University of Jorge Tadeo with leading meditation several times a week in Bogota, and traveling to other centers in Colombia.