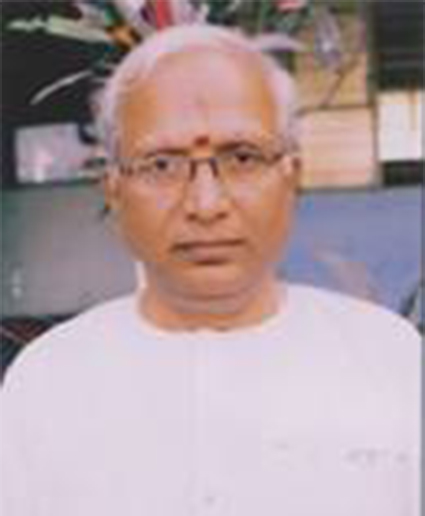 Yogacharya Kantha Rao baba was a married householder, former graduate teacher in mathematics in Chilakaluripeta, Andhra Pradesh, and the father of two children.

In 1991 he was blessed with the holy darshan of Pujya Paramahamsa Hariharanandaji in the Rourkela Ashram in India, where he received initiation into the divine path of Kriya Yoga. His family is also initiated into Kriya Yoga. Kantha Rao baba had long cherished the memory of his first meeting with Gurudev, in which he experienced a great flame sitting before him. Speaking of his beloved Master, he recalled, “His holy touch made the mind still, and I felt divine vibration wherever he touched me. When I first saw Gurudev’s photo, I instantly felt as if I knew him from many lifetimes ago.” Indeed, after his first meeting with the Master, he and his family were well convinced that they would live and die as Gurudev’s children.

Kantha Rao baba was in charge of the Hariharananda Kriya Yoga Satsanga Kenda, Tenali, AP, for many years. As a result of his steadfast effort and loving devotion, in 2011, he was initiated as a yogacharya in the divine Kriya Yoga tradition by Pujya Guruji Paramahamsa Prajnananandaji. He translated many of the books of Prajnana Mission into the Telugu language.

Kantha Rao baba frequently shared these treasured words that Gurudev once wrote in a letter to him: “Meditate, meditate, meditate until you realize; try to cross the Gate before sunset.”

On the morning of April 23, 2021, Yogacharya Kantha Rao Baba left his physical body. He will always be remembered for his dedication to the cause of gurus.