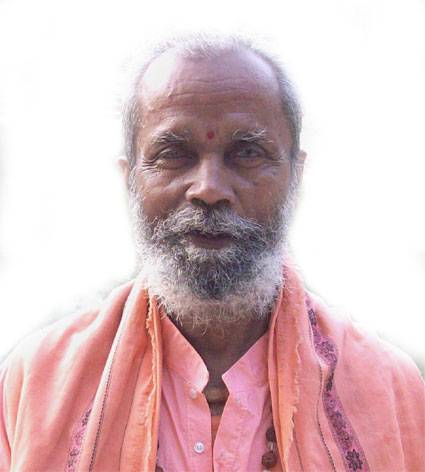 Swami Apurvananda was a long-time disciple; he met Shri Gurudev in 1973 at Karar Ashram, and met his master Paramahamsa Prajnanananda in 2002. He was married and lived a happy family life, and in 2004 at the age of sixty-five he came to Hariharananda Gurukulam to become an ashram resident. He was initiated into monastic life in 2009.

Swami Apurvananda was a person of simplicity, humility, love, and compassion who touched the lives of countless people who visited Balighai. Every day at noon time he did puja at the Deva Mandir and offered cooked food, and in the evening he did arati at Shri Guru Mandir, blowing the conch and chanting hymns in a very devoted manner. He cut grass for the cows and fed them at Nandini Goshala every day. He was always peaceful and joyful. He had such a motherly nature and would make sure to give residents and guests some milk or some fruit he had plucked.

He had been suffering from heart trouble for some time. He visited Rajasthan for the Go Kripa Mahotsav and then went to Dwarka, a holy city in Gujarat. Then he went to Ujjain two days ago and was happy to participate in the Kumbhamela. He felt a little uneasy today and was hospitalized in the evening. We all visited him in the hospital, and during this time he was peaceful and loving. He left his body at 11:45pm IST, in the holy city of Ujjain during this special occasion of Kumbhmela.

Let his soul rest in peace. His service, love and care for all, and his dynamism and devotion will have a long lasting impression in the minds of all the residents and those who visited the Gurukulam.