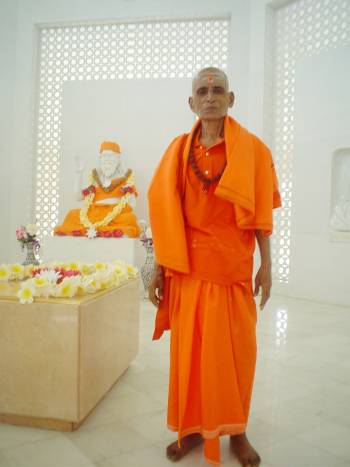 Known as Prakash Chandra Shrivstav in his pre-monastic days, Swami Akhandananda Giri was born in the district of Madhya Pradesh, India. Married at a young age, his love of math and literature led him to pursue a career in teaching at a local school in Bemetara.

After his wife passed away, his destiny took a turn in another direction.  Spiritually oriented by nature, his attraction for learning the ancient, divine technique of Kriya Yoga was impassioned after reading Paramahamsa Yogananda’s Autobiography of a Yogi.

While living in Durg in 2000, he was initiated into Kriya Yoga by Swami Brahmananda Giri.  Shortly thereafter, because of his intense devotion, he became vice president of the Durg Kriya Yoga Center.

In 2003, Swamiji relocated to the Hariharananda Gurukulam in Balighai. While residing there, he translated many books from English to Hindi for Prajnana Mission.  Then, in 2007, on his 70th birthday, during the auspicious Centenary Celebration of beloved Gurudev, he received monk’s initiation from Paramahamsa Prajnananandaji. However, within a few months after his initiation his destiny once again took another turn, and Swami Akhandananda left his worldly body, which is now laid to rest at Hariharananda Gurukulam.