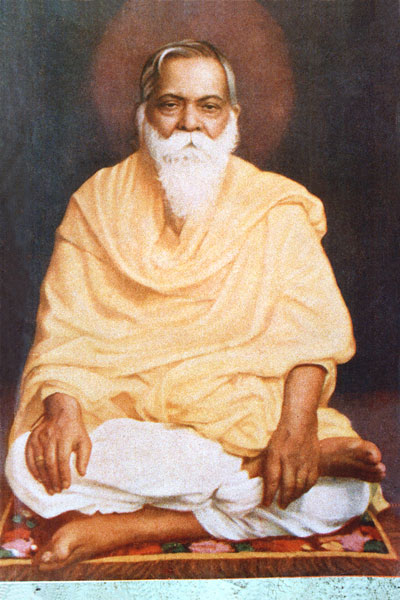 A boy of sixteen, initiated into Kriya Yoga, stood before the great master Lahiri Mahashaya with a handful of flowers, a moistened heart, and tears streaming down his face. The great master entreated him to confirm his dream in the holy abode of his Gurudev. Moved deeply by his profound yearning for godhood, purity, and humility, Lahiri Mahashaya made the boy’s dream a reality by initiating him into the holy path of Kriya Yoga.

Bhupendranath Sanyal Mahashaya was born on January 20, 1877, in the village of Sadhana Para in the district of Nadia in West Bengal, India. This area is a holy and spiritually fertile land that has given birth to many great personalities, sages, and saints such as Shri Chaitanya Mahaprabhu, Paramahamsa Hariharananda, and Shri Sitaram Das Omkaranath.

Early in life, when he was barely two, his mother passed away and abandoned him completely to the care, nourishment, and guidance of his maternal uncle, elder sister, and sister’s husband. Sanyal Mahashaya bloomed into a divine person filled with inner joy and beauty in the spiritual environment of this Brahmin family. His regular spiritual practice began in 1890 at the age of thirteen just after his sacred thread ceremony and his initiation into the gayatri mantra. He passed his time reading religious books, scriptures, and meeting spiritual persons, saints, and sages. His spiritual practice and education were impeded by frequent illnesses during his schooling and subsequently in his college days.

Sanyal Mahashaya's frequent illnesses compelled his sister to seek the intervention of his Gurudev. He assuaged her, however, saying Sanyal Mahashaya would live long, and many works urgently awaited his attention to be fully accomplished. Sanyal Mahashaya was so sincere, devoted, and committed to the practice of Kriya Yoga that he quickly ascended to the higher techniques and experiences. This inspired his Gurudev to allow him to initiate others into Kriya Yoga.

Lahiri Mahashaya, sensing his imminent departure from this earth, omnisciently advised his dear disciple Sanyal Mahashaya to learn other higher techniques from Panchanan Bhattacharya, a highly advanced disciple and founder of Arya Mission, and to spread the message of Kriya Yoga. In spite of his avowed determination to accept a monastic life, Sanyal Mahashaya was destined to marry Kalidasi Devi at the age of twenty-one, following the footprints of his ideal and exemplary Gurudev. While discharging his household chores, as a father of two sons and four daughters, there is no evidence that he ever strayed from the Kriya Yoga path. Ascending to a state of Self-realization in 1902, he was widely adored as a well-established and fully accomplished yogi. His talents and skills, his untainted, unalloyed character, as well as his inner spiritual enrichment, created a close friendship with Rabindranath Tagore, with whom he worked as a teacher from 1902 to 1909, founding Shantiniketan Institute. The sacred serenity of Puri attracted him to pilgrimage to Puri many times. He established an ashram there named Gurudham in 1923 and an ashram named Bhagalpur in 1924. Bhagalpur became a center for the spread of Kriya Yoga.

A gifted and prolific writer, Sanyal Mahashaya wrote many spiritual books and commentaries on the Bhagavad Gita in Bengali, demonstrating his understanding of the scriptures in the light of Kriya Yoga.

On the 18th of January, 1962, he entered into the eternal abode know as mahasamadhi, but he remains immortal in the hearts of thousands of devotees and spiritual seekers who got a glimpse of an ancient rishi, a great yogi, and a divine guide and master.