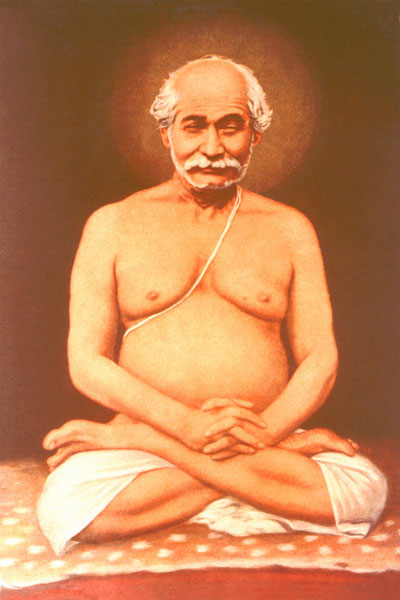 On September 30, 1828, on the auspicious seventh bright moon day of dasahara, while the villagers of Ghurani in the holy land of Nadia, in West Bengal, were ecstatically immersed in the worship of Divine Mother Durga, Lord Shiva blessed Gourmohan and Muktakeshi with a divine child. In ancient scripture and Vedic literature, Rajarshi Janaka was legendary for his extraordinary ability to remain spiritually pure while living the majestic life of a king, but Shyamacharan Lahiri went a step further, living as a liberated soul while leading a worldly life in modern society.

Shyamacharan Lahiri was ordained by Babaji Maharaj to liberate both saints and householders through the easy and simple techniques of Kriya Yoga. Under the able guidance of his erudite father, pious mother, and the watchful eye of Babaji Maharaj, he matured into a Self-realized divine being, established in sthitaprajna and wisdom. His interpretation and analysis of Indian and Western scriptures was based on his personal realization of their essence, rather than intellectual analysis.

Lahiri Mahashaya tied the nuptial knot with Kashimoni, the daughter of Mahamahopadhyaya Pundit Devanarayan, a reputed scholar of Kashi. Their marriage was a splendid divine play of the Almighty ­— the great union of Lord Shiva and Goddess Durga. Lahiri Mahashaya braved all worldly woes with a sense of inner detachment and equanimity. When Kashimoni tried to bring these to his notice, his usual refrain was, “Surely Lord Vishwanath who sustains the universe can maintain a small family.” He remained unruffled during an ordeal of acute financial hardship he endured while working in the public works department of military engineering. Detachment from wealth and property was the hallmark of his unostentatious life.

Lahiri Mahashaya’s spiritual quest reached its peak when he was transferred to the Himalayas. It was there, in Ranikhet, that he met his deathless guru, Babaji Maharaj. Materializing a magnificent golden palace studded with countless dazzling jewels and gems of all varieties, Babaji Maharaj initiated Lahiri Mahashaya into all the sacred and secret techniques of Kriya Yoga. Lahiri Mahashaya was highly gratified to attain such an inconceivable stage of God-realization. As instructed by Babaji Maharaj, he returned home to perform the worldly duties of an ideal householder. He became a perfectly realized yogi, able to show the path of liberation to householders, brahmacharis, and yogis alike. Word of his spiritual attainment spread, drawing devotees and seekers from all walks of life towards him.

Siddhi yogi Lahiri Mahashaya's divine play of miracles was without end. Though he had a physical body, he was also formless. Materializing in more than one place at the same time, he accomplished his work. Kind-hearted and generous, he miraculously saved the lives of many disciples and drew true seekers to him like a sweet and fragrant flower bewitches bees. His state of wisdom and his perfect balance were displayed when he continued a discourse on the Bhagavad Gita, unperturbed, while his family members mourned his daughter’s death.

Lahiri Mahashaya's mahasamadhi took place on September 26, 1895, the day of mahastami worship of Mother Durga. As he entered into the eternal abode of God, he said: 'Those who practice this immortal Kriya Yoga shall never perish and become orphans. Obtaining this great and immortal Kriya Yoga from Babaji Maharaj, I resuscitated it in this world. In the future, it will spread to every house, and man will gradually move ahead on this path to the ultimate liberation. The path of salvation shall always remain open to mankind. The time has come for my departure. Even this gross body is destroyed and the ever-existent guru is always with you.' Lahiri Mahashaya's diaries, interpretations, discourses, and exemplary life remain as testimony to his fathomless state of wisdom and spiritual attainment.