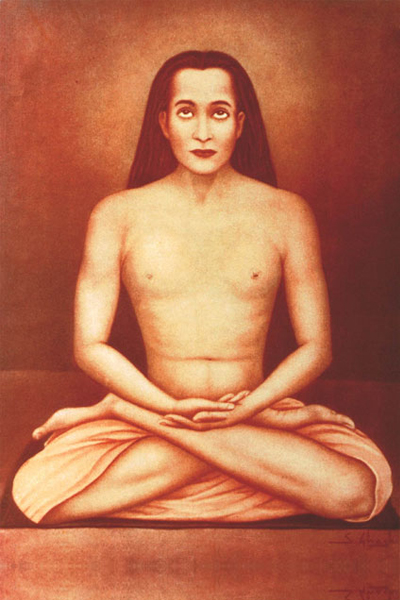 Mahavatar Babaji Maharaj is both ageless and eternally young. Sometimes he is formless, while at other times, he appears before his disciples in any form he wishes to liberate humanity from its worldly fetters.

Adoringly addressed by various names, such as Mahamuni, Tryambaka Baba, Shiva Baba, and Badua Baba, Babaji Maharaj cannot be described with any historical or scriptural certainty. His works are divine, shrouded in a mystery that eludes precise detail. Time has failed to reveal the facts about his birth, identity, and life. He is primordial, mahakal, and immortal, not remaining captive to the bounds of time and space. He is supreme and unparalleled among all saints and sages. He assumes an all-compassionate, beautiful, luminous form to provide an experience of new life to confused, grieving, fearful, despondent, and doubtful people, showing them the highway to God-realization.

Babaji Maharaj remains engrossed in deep meditation in the dense forests, caves, and snow-covered peaks of the Himalayas, at the same time keeping a watchful gaze on earnest seekers on their paths to the Ultimate. His divine play of miraculous appearance and disappearance, as narrated by his disciples Lahiri Mahashaya, Swami Pranavananda, Swami Shriyukteshwar, Hamsa Swami Kevalananda. Paramahamsa Yogananda, and Paramahamsa Hariharananda, is his unique way of guiding disciples on the path of divinity toward rapid liberation.

There is a scintillating account of his propping up Lahiri Mahashaya from infancy to ascension to godhood, like a bird shelters its offspring under protective wings. He initiated Lahiri Mahashaya into the liberating and sacrosanct techniques of Kriya Yoga. By Mahavatar Babaji’s limitless divine power, Lahiri Mahashaya entered the deepest level of God-realization, the state of nirvikalpa samadhi. Crossing the successive stages of Self-knowledge, he remained anchored for seven days in the deathless realm of brahma loka. The compassionate Babaji Maharaj instructed him to go back to the world and perform his worldly duties as an ideal yogi householder, blazing the path of liberation for worldly people and sannyasis alike who earnestly sought God-realization. In this way Babaji taught that liberation was no longer the monopoly of a few select sannyasis, and that worldly people could attain godhood without abandoning their duties. By seeking the soul at every moment during all activities, we can achieve God-realization.

Like a director who remains in the background instructing the actors, Shri Babaji Maharaj oversees the worldly stage, appearing only rarely. At Kumbha Mela, he addressed Priyanath (Swami Shriyukteshwar), the dear and close disciple of Lahiri Mahashaya, as “Swamiji,” to Priyanath’s utter astonishment. He instructed Priyanath to write a book combining the essence of Indian metaphysics with that of the West, promising to meet him the day it was finished. True to his word, Babaji Maharaj visited him on the day the assigned work was completed, as Priyanath exited his bath in the Ganga at Shri Rampur.

Lahiri Mahashaya, Babaji Maharaj, and his sister, Mataji, appeared from a flash of light at the Dasahwamedha bathing ghat to Ramgopal, who had been told go there by his guru, Lahiri Mahashaya. When Babaji Maharaj desired to shed his body, his sister Mataji said, “As there is no difference between being ensconced in Brahma and the deathless form, pledge before me that you will never relinquish your body form for the liberation of the entire human race.” Listening to her prayer, as a hallmark of his great compassion, he promised it would be so.

Babaji Maharaj’s divine majesties and the cosmic enactment of his dream are endless. He roams forever in the vast ethereal canvas of divinity, transcending limitations of worldly distinctions such as caste, class, religion, culture, history, and geography. He brought the message of Kriya Yoga to the West through Paramahamsa Yogananda and Paramahamsa Hariharananda, who were brought by his direction into close contact with Swami Shriyukteshwar for spiritual grooming and stewardship. He appeared before Paramahamsa Yogananda before Yoganandaji's voyage to the West.

The earnest prayer of Brahmachari Rabinarayan (Paramahamsa Hariharananda) to glimpse Mahavatar Babaji’s form was benignly answered when Babaji appeared to him in Puri Karar Ashram in 1949. Pleased with Paramahamsa Hariharanandaji’s high spiritual attainment, Babaji Maharaj inspired him to visit the West in order to propagate Kriya Yoga.